In April 1966 after a lapse of almost ten years Bideford Swimming Club was restarted by Mr Jim Needs, Mr Cyril Webber and a number of interested parents. The first records available are in 1969 when the  club membership was: 131 Juniors (14 & under) and 20 seniors (no ages stated). Training took place at the patio pool Westward Ho! and winter time at Lenwood Country Clubs little indoor pool. In 1976 after much discussion, the committee decided that training would take place at Torrington, some members feared they would lose swimmers to North Devon Dolphins who were also training there. This didn't happen and the club began to gain swimmers from the Torrington area, so much so that at the AGM in 1977 the decision was made for a change of name, and Torridgeside Amateur Swimming Club was born!

The new logo incorporating heraldic symbols from the coats of arms of Torrington was designed by Jim Paterson of Bideford Art College, the design we still have.

Jonny passed the coaching duties to Bob Miles at the AGM in 1979 giving his reason for leaving that he had grown tired of the apathy of the senior swimmers (nothing changes!).

The North Devon Mini League was founded in 1978 by Barnstaple, Ilfracombe & Torridgeside later to include such teams as North Devon, Exeter, Okehampton & Tiverton.

We didn't win the mini league until 1994 but then dominated it for the next 10 years.

Joined Speedo league 3rd.division in 1998 rose to 1st division by 2001. In 2019 we now have around 150 members of all ages and abilities, with the club continuing to grow strong in numbers we look forward to the future of the club 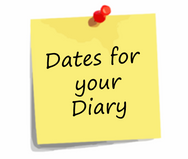 Entry packs and more details are available in 'Links & Downloads'